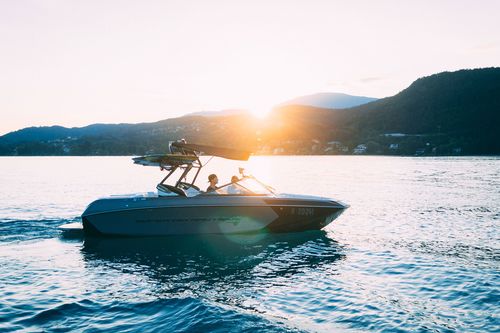 Invasive species of aquatic plants and animals enter the U.S. daily without detection. They come from Europe, Asia and South America; stowed away deep in the bilges of large seagoing vessels. Once they arrive at U.S. ports they quickly invade to turn native aquatic plants and animals into endangered species. They cost billions in damage to commercial and recreational industries. The U.S. Fish and Wildlife Service officially calls them aquatic nuisance species (ANS) and considers their threat so ominous, an ANS task force of hundreds of federal, state, and municipal agencies has been mobilized to stop alien species by adding new steps to clean boating practices. A new form of border control helps water recreation enthusiasts clean up their act to avoid spreading ANS infestations.

Aquatic invasive species have stowed away to U.S. shores on ships from around the world since the 1800s and have now spread to over 40 states. As large merchant and cruise ships dock in U.S. harbors for refueling purposes, they drain bilge tanks, used to maintain a vessel’s stability as fuel is expended. Bilge water containing aquatic species from foreign countries is deposited into freshwater harbors, like that of the Great Lakes Region, where organisms colonize on boat hulls, engines, and submerged structures, wreaking havoc on natural waterways and delicate ecosystems. Although ANS are linked to harmful virus and bacteria that infest fish and shellfish populations marketed to consumers, they don’t directly impact human health. For many invasive species, humans are their only enemy.

Among the list of aquatic invaders are species right out of science fiction: Sea Lampreys that attach to fish and suck out bodily fluids, microscopic larvae of the Zebra and Quagga mussel that threaten water treatment operations at nuclear power plants, snails from New Zealand, round gobies from the Caspian Sea, Asian swamp eels, and a host of aquatic flora and fauna from exotic regions around the globe. Populations of more than 57 new species have been introduced to the Great Lakes Region alone since the opening of the St. Lawrence Seaway in 1959, promoting a $400 million effort to combat ANS infestations in the Great Lakes each year. The invaders vary in shape in size, but all have one thing in common – they have few natural enemies in U.S. waters.

A new ballast water treatment rule (August 28, 2009) enforced by the U.S. Coast Guard on freighters entering the St. Lawrence Seaway sets standards that may not be fully met until 2031, according to Andy Buschbaum, executive director of the Great Lakes Natural Resource Center. The ruling, he says, “is like giving a patient a powerful medicine, but only after he’s dead.”

Spread by a Pair of Sandals

Once non-native aquatic species enter lakes and rivers, even the most environmentally conscious person can unwittingly spread them from lake to lake on the oar of a canoe, the hull of a kayak, or a pair of sandals. But according to the ANS task force, preventive measures taken by individuals can make an immediate impact on the spread of non-native species. Boat owners, seaplane pilots, jet-ski enthusiasts, sport fishermen, hikers, and just about anyone who moves from one body of water to another can use preventive measures to curb the spread of ANS.

Prevention starts the moment watercraft are pulled out of a body of water:

Recreational watercraft may not be the original cause of infestations of aquatic invasive species, but keeping boats, seaplanes and other watercraft clean is key to keeping U.S. waters free of unwanted and damaging inhabitants.