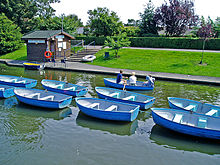 In spite of the drought that has plagued many US states in 2011, water levels at Lake Powell are at a ten year high, and boaters are loving it!

In spite of historical droughts plaguing the American Southwest, record-setting snow and rain in the Colorado Rocky Mountains in the spring of 2011 has water levels at Lake Powell at their highest level in ten years.

Lake Powell is an immense, deep blue lake framed by colorful red rock desert sandstone walls that crosses over the border between Utah and Arizona. It is named for Major John Wesley Powell, who charted the area between 1869 and 1872. It is considered a sanctuary for boaters of all kinds. However, according to Account Executive Lauren Pearce, visitors come to Lake Powell for many activities.

“The lake offers excellent fishing, and great open water for water skiing and wake boarding, back canyons to explore by motorboat or kayak and endless shoreline to beach a houseboat,” Pearce said.

With its deep, azure waters reflecting the clear Southwestern skies and surrounding rock formations in various sunset shades of red and orange, it seems as if Lake Powell was created by nature just for houseboats, but Lake …